We get asked to produce one off Hoardings regularly – some are very simple signs advertising an event, a forthcoming site or for brand reinforcement.  Because we can install a mixture of cut vinyl, printed and contour cut vinyl as well as mounted panels our clients get a totally flexible approach – which brings with it the attitude towards exterior hoardings that we apply to all the work we do.  Can we make it better, is there a more effective way to approach a particular problem or can we offer suggestions that make something work better.

Many of the huge hoardings you pass as you go through Milton Park have been manufactured and installed by carbon colour for MEPC the owners of the park.  The wind breaks under the tent are a perfect example of how all the processes we offer can be brought together and used to good effect.  Whilst the big blue hoardings on the first roundabout have been made to last and cope with the ravages of the Oxfordshire weather.

when it comes to T Towel packaging, carbon colour can help with selecting the right material to compliment your product, advise on size, content and use of illustration or photography.
Or if you need some further help our studio can design and produce ideas for you, whether its a belly band, sleeve or packet –  or if you prefer we can work with your artwork as long as it’s supplied in a suitable format.

We can offer lots of other options to help you create custom packaging for your products, from the simplest plastic sleeve with an inlay to the wrap around which continues to be a very popular solution.

Wrap around belly bands for T Towels and other products can be made to almost any size and branded with your logo in a very short period of time.

Carbon colour can help with other packaging options and we can source a whole range of things which can include printed bags, carton gift boxes with windows, pillow boxes, hanging tags, window mobiles, shelf strips and pack inlays etc.

For the past ten years we have worked with the Museum of Oxford – producing exhibition panels and background materials for many of their most popular events.

Opened in 1975 it immediately intrigued locals and visitors to the city with the story of Oxford and how it has developed. Bringing together a diverse collection, everything from Roman pottery to marmalade jars, the Museum of Oxford weaves the story of the city from the prehistoric to the modern day.

The Museum of the History of Science houses an unrivalled collection of early scientific instruments in the world’s oldest surviving purpose-built museum building, the Old Ashmolean on Broad Street, Oxford.

Both a department of the University of Oxford and an active public museum, they offer a programme of family-friendly events, gallery tours, table talks and much more, along with taught sessions for schools.

We were commissioned to mount a large Jackson Pollock print which had been purchased from Modern Art Oxford – initially onto Foamex to maintain its stability and then to oversee its installation into a private house in Oxford.

Modern Art Oxford is an art gallery established in 1965 in Oxford, England. From 1965 to 2002, it was called The Museum of Modern Art, Oxford, a visual art gallery devoted to presenting exhibitions of modern and contemporary art. They have a national and international reputation for the quality of exhibitions and accompanying community and education programme. Funded primarily by Arts Council England, all of their exhibitions and many of the events, activities and workshops are free for visitors. 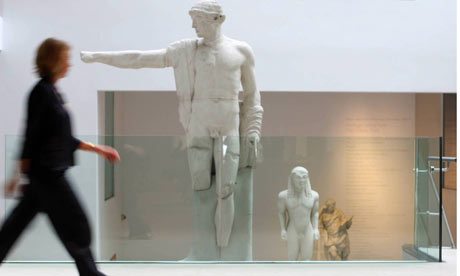 For one day only in 2010  the Bodleian Library put on display a selection of items from its collections relating to Lewis Caroll’s Alice in Wonderland.

The event was part of Oxford’s Alice’s Day celebrations. Items on show include twelve Alice in Wonderland illustrations with original woodcuts and an original etching by Salvador Dali dating 1969. Also on display will be a printing plate for The Mouse’s Tale, a poem by Caroll, from c.1890, kindly lent by the Oxford University Press archive and a selection of earliest editions of Alice in Wonderland.selection of items from its collections relating to Lewis Caroll’s Alice in Wonderland.

The display included a first edition printed by Oxford University Press in 1865 which was withdrawn by Carroll because the book’s illustrator, John Tenniel, found the printing unsatisfactory. Other early editions of the work were also on display including the first American publication from 1866.
Other events were also held in the Ashmolean Museum, Botanic Garden, Christ Church, Museum of History of Science and the Museum of Natural History.